Allows both AGLD holders and Loot holders to vote: either give equal weightings for 10k AGLD = 1 Loot, or have them vote separately.

When Loot grows, you want many more people to have skin in the game and participate in governance. This cannot be achieved by Loot NFTs alone, as there are only 8,000 of non-divisible ones. The number of holders will remain small.

AGLD allows the further decentralisation of Loot governance, as more people have skin in the game. Of course, OG Loot owners will still play a vital role in governance. Loot and AGLD work side by side, but not one over another.

Co-governance is the way forward.

Why not the realms community? Or mloot? Or any other similar derivative or building block?

If truly the concern was about expansion and bringing in other voices, I would expect us to be spending our energy designing a better solution, not just figuring out how to make do with what we already have (in a rather arbitrary way, if I may add).

Do you see why this is a slippery slope and ridiculous to even entertain? Combining governance with AGLD doesn’t make sense and the incentives are not always aligned between the two communities, though they can work together and help each other as separate entities. Also, 55% overlap between the two communities (last I checked, probably lower now).

Each community governing themselves and their own treasuries makes for more aligned incentives in growing their project as well as the Loot ecosystem as a whole.

Doesn’t a 55% overlap mean a majority believe AGLD is part of this project?

There have been other proposals which indicate the same thing. Ie: Around 60% of Loot holders voted to give AGLD voting rights: Snapshot

Other relevant attempts to understand where the community stands on this topic can be found here: https://twitter.com/KyleSamani/status/1434473587763777540. Read the comments. Although not scientific it’s very telling of overall opinion.

Your description of AGLD is misinformed to say the least. The loot community is firstly the individuals that minted the token, and it was they that chose to build AGLD for the purpose of governance. They are the 55%.

Because giving Agld more value allows it to be used as a treasury for the DAO which can be used to fund games and tools that would otherwise not be able to fund themselves due to the nature of their design.

This is just naively ranked by top AGLD holders, I could use SQL help to answer the following question:

“What the minimum % of Loot holdings that could represent a majority of AGLD?”

Polk it would be useful to unpack these numbers further. They are very interesting.

<20% of Loot to achieve 51% AGLD really just means that a few Loot owners have hoarded 51% of AGLD tokens. It doesn’t tell you much about cross ownership generally.

Numbers have moved a lot in the last 24hrs.

It would only require 3 bag holders (representing <7% of loot) to joint with loot-less AGLD holders to achieve 51%. 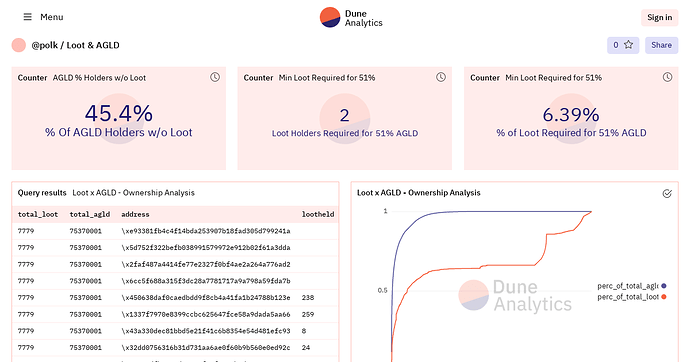