Genesis Scrolls Round 1: Step into the Rift

Step Into the Rift

Codigo Simian wasn’t exactly what I would call an ordinary fellow. He was raised in a village with no name, near the barely-named town of Tuygi. His mother was an underrated seamstress, and his father died in a pointless war when he was 10. Though, none of these things were really out of the ordinary.

Those things weren’t what interested me in Codigo. It was the way he’d just sit and watch a stream for hours on end, observing the ripples and eddies form and disperse over and over in different ways each time. Or how he would look at the sky and smell the air, and know to take the long road around the canyon before it started to rain and flood. Most of all, it was when he first picked up that bag, and started noticing ME.

So I called to him. It was time we had chat.

I was compelled to act. The first couple of weeks with the bag, I would rush home from my journeyman post with the smith, and pull out the Warhammer from the bag to go patrol the road to Tuygi from town. My old fear of the bandits and ghouls that would take to the road through the forest, was replaced with a sense of purpose. Now they had something to fear.

On my eighth night patrolling the road, I noticed it. I was resting at my fire when a squat ghoul tried sneaking up on me, but I heard his clumsy approach. Just before he could reach me, I spun and launched my Warhammer towards the sky and through his face. As the life was leaving the ghoul, I felt it. It was as if I was being watched, but from all directions. As if the air noticed what I just did. Not a sense of judgement, but a sense of knowing. It was unsettling and invigorating all at once. What was IT?

I kept to my nightly patrols, with my senses tuned to suss out this strange force. I would feel it now and again. When I would escort a lost merchant to safety, or find a group of bandits that hadn’t gotten the message that this road isn’t safe them.

A collapsed into my bed after a patrol one night. That’s when it called to me. I didn’t dream, but had a vision. I saw the entirety of my world enveloped and connected by raw energy of power and light coalescing into a single point. It looked like an hourglass, but instead of sand it was the world’s EXPERIENCE funneling into a single point. Every action was contained and observed. At the bottom of the hourglass was a vast temple, absorbing the energy. It was the most glorious sight I’ve ever seen. 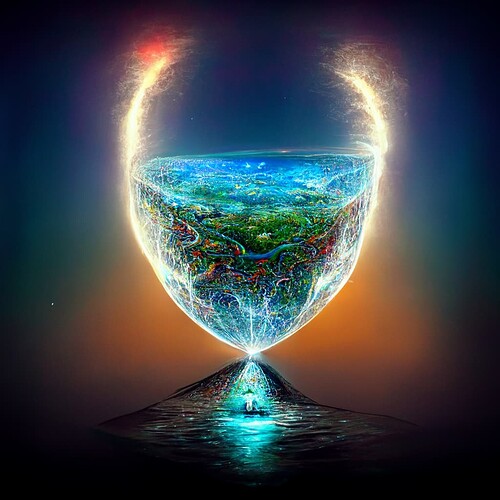 Just as quickly as the vision came, it left. I woke up shaking in bed, skin colder than the Ik Nupay mountains. Mom was there to comforting me. She was trying to hide it, but I could tell she was frightened.

I left home 40 or 42 days ago. I can’t really remember. I didn’t exactly know which way to go. It was more of a feeling. That feeling took me northwest, away from the sea and in to the desert. Every time I slept, I would search for this place, this rift, but I found nothing. All I had to go on, was the feeling that I was closer.

Now I was fully in the grasp of the desert. I only had provisions for twelve days when I entered it, and this was my ninth day of hiking into its heart. Had I really just walked my way into my own death? Maybe this bag is just a curse, and the exact same thing happened to the unfortunate that found it before me!

Night was falling, and I was exhausted. I reserved most of my travel for the night time, as I figured it was safer to sleep during the day, but the warm night was too much for my beaten body to resist. I laid down on my bedroll, and began to close my eyes. Then on the horizon I saw a faint glow! I just laid there and looked at it for a few minutes, partially to soak in what I was seeing and partially to make sure I wasn’t seeing things. I finally got up, I didn’t bother packing up my little campsite. I just grabbed my bag, and walked towards the light.

I walked the entire night, as the glow took up more and more of the horizon. When the sun rose, I saw what looked like a structure miles away. It was real! I increased my pace, but was certain I couldn’t keep it up much longer.

By dawn, I had arrived at the Rift.

I saw a large stone temple with light emanating from the top. Or was the light coming in? It had long, seemingly endless, steps going up to its entrance. The stone was etched with what looked like hundreds of different languages, including common tongue. It read, “…ENTER AND KNOW AND ENTER AND…” repeating over and over. 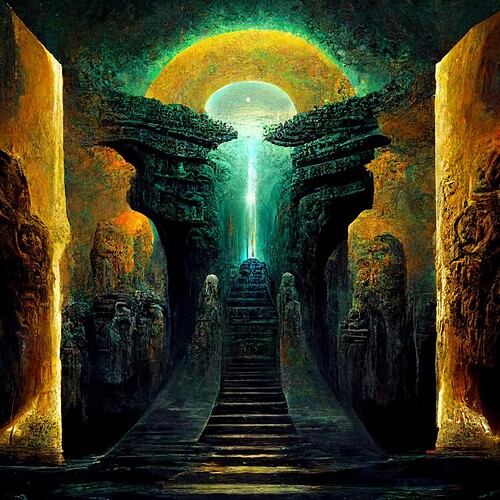 I walked towards the steps, and placed my foot on the first one. Next thing I knew I was inside of the temple. I stood at an elevated doorway. In front of me was an atrium, the light was flowing from above and concentrating in the center of the space. Behind me was a long hallway that led to the temple entrance, at least I assumed judging by the desert beyond. Surrounding the atrium were dozens of similar doorways connected to similar hallways, but there wasn’t desert beyond those hallways. The few that I caught a glimpse of, each led to a different looking place. And yet, that was barely an afterthought compared to that light. I stepped towards it. 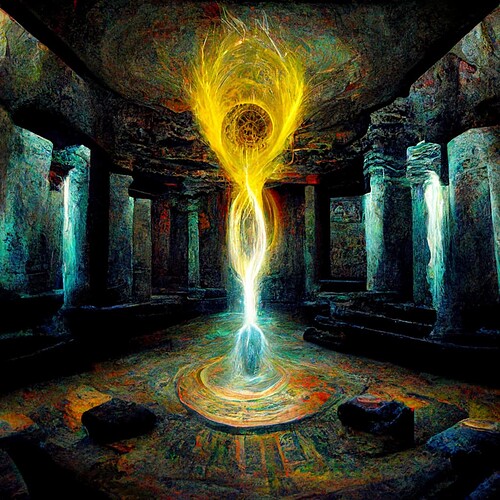 Just as I had decided to step towards it, it began to amass at the center of the atrium. It started to take shape, to form into something. The light stopped flowing from the sky, and the shape before me formed into a large hooded being. I dropped my bag, I was petrified! Not because the being looked frightening, but because I had never felt the presence of pure power. Instead of a face, the hood contained eternity.

This is what brought me here. 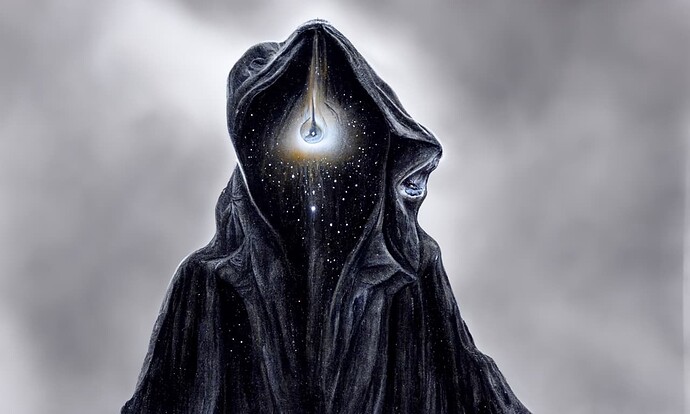 “HELLO CODIGO SIMIAN,” it whispered like rolling thunder. I didn’t hear the words, they just echoed through my mind.

“Who are you?” I wasn’t surprised it knew who I was.

“Isn’t this place the Rift?” I thought.

The Rift echoed, “WE ARE ONE. WE ARE THE NEXUS OF EXPERIENCE. CLOSE YOUR EYES AND SEE”

I thought back to my vision those many nights ago. The entirety of the world’s actions and experiences condensed to a single point, this very place. The vision in my mind’s eye started shifting and evolving, I was no longer in control. The condensed world expanded in every direction, taking up the entirety of my vision. I was high up over the earth, I could see faraway lands in every direction…it’s so big. I flew close towards the earth and floated over a landscape. In the horizon to the east I saw the sea and my village. Across the horizon to the west were rolling hills dotted with other villages, and in the far west were the dead lands. Connecting all of it, was the same glowing energy that created the Rift. The villagers tilling their land caused the light to glow a little brighter over them. A pair of adventurers fighting the ghouls from the dead lands had even more light over them. And brightest of all was the light coming from the top of the craggily mountain.

The vision began to morph again, the sun began to rise and fall over the landscape faster and faster. Time was accelerating! I could see the light over the pair of adventurers split, they went their separate ways. The first one went back to one of the villages and stayed there for years, their light grew only a little over that time. The other seemingly sought out the energy. They grew their light by venturing into crypts and caverns, and patrolling the roads just as I had! Eventually, their light was the brightest one I could see. Then the light over the mountain stirred, and out burst a red dragon flying straight towards the adventurer…

It all made sense now! The whole world is connected through its experience! That experience is power that anyone can harness. I just have to seek it out.

That’s when I opened my eyes, and I was back home in bed. It was daybreak. I stood up, grabbed my bag, and stepped outside. I saw the light. Now my adventure can begin.