The Prologue is set in the pre-Genesis time era and the start of the Order of Chad series is during the Age of Adventure, skipping Genesis through to The Mist as the characters are not on the same world as the Divine City or possibly even same universe.

If you haven’t read the first couple of Chapters (which have been re-written, so if you haven’t do not bother, start with the Prologue as that is the least edited).

The Brotherhood was renamed the Order of Chad after the events of the Prologue, for them to fit into a new society in a new world.

As usual, any feedback is appreciated, particularly in relation to what projects want to see in terms of storyline direction. The existing timeline gives writers a good reference point for one vector, but for specific project needs, more information would be useful.

All just general musing, I don’t think there is any real clear answer to what approach is best.

As Gerard charged into the hordes surrounding the Temple entrance, an unholy groan sounded from deep within its stone inner walls, the sound channeled from the depths below it.

Fuck, he thought with a hint of despondence,
That has to be from the catacombs…
this is no mere incursion, this is an invasion.

Every Temple of the Order was built to last, be it to serve a few hundred villagers or a thousand townfolk. In the bitter depths of Winter, a Sister could always be found stoking a hearth and dishing out portions of bread or pottage to the poorest of the Empire. A Temple held vast grain silos and was almost as big underground as it was above, with many levels dedicated to various purposes, such as the ice room that stores Winter ice for those too poor to afford the services of a Mage Enchantment specialist. 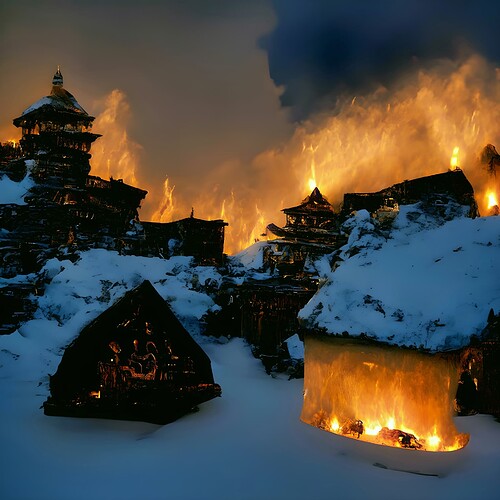 The only fire to be found for Gerard was the Temple Village amenities, the poultry coop, and the wooden bathing pavilion reducing his night vision to the point that the holy light of his longsword was his easiest frame of reference as he sliced and diced a path of carnage and gained the attention of the whole horde.

There was a scant thirty meters between him and the temple door, which he assumed was barred, but for the moment just leading the horde away from the rest of the party would have to do. Rejoining them was a problem for future Gerard, staying alive was the focus, and with the dying rays of light, he only could pray to the Divines that the zombies needed light to see.

Those he had fought in his youth certainly did, but they were merely animated corpses, generally by a lone Dark Necromancer or awakened Lich in a crypt. He doubted either would have the skill and miasma necessary to have created the horrific caricatures of people with wolfish teeth and exposed sinewy flesh.

He had never seen anything quite like it, and although the blessed suit of Holy plate mail that the Quartermaster had provided him for the mission had served him well, attempted bites turned heads to ash.

Where your regular undead will attack anything with a pulse, he could swear that these almost had sentience. They almost fought better than your average pikeman, with feints and distractions. Gerard was pushed to his limit in just keeping on ducking, weaving, jumping, and dodging his way through burning and collapsed buildings.

Elissa watched briefly when Gerard’s blade first met rotten flesh, pulsating with every hit, but the Undead that had chased them thus far had been drawn away and the back entrance was within sight, several disgusting yet humanoid zombies remained pounding at the door, but the more horrific creations had taken off in pursuit of Gerard.

“I’ll take out the ones by the door and we can make a dash for the roof, Hulk, about that illusion? Could you use it to draw the horde off Gerard somehow?” Elissa asked.

“I can try, but as I said, no idea if it il work or not,” Hulk replied, dropping John unceremoniously onto the stone wall.

“ARRTAAAHGHHH!” John screamed, gathering the attention of the remaining undead.

Ooops, Hulk was too preoccupied running through hundreds of various illusion spells “Sorry!” he said to John, for the first time ever.

“FUUUCKKINNNG BASTARD!” John continued, Hulks ‘Dome of Silence’ spell being cast a little too late, “What the FUCK is wrong with YOU!”

“I forgot man!” Hulk pouted, until Elissa slapped him, hard, across the face. ‘OW! What was that for!I said I was sorry…”

“Both of you shut the fuck up” she hissed and directed their attention to a large troll corpse that had emerged from one of the burning buildings, immediately notching an arrow and letting loose at a zombie scaling the wall,“This is your fault Hulk! Do something useful already!”

Hulk took the rebuke in stride and focused his attention on the necrotic troll.

He had never seen any troll like it, which was saying something. Being part of a scouting troop for six years gives a person plenty of time to get acquainted with the various species of trolls and other species of Plouton, and climates that they inhabited or raided.

This was definitely a deceased of one of the Northern Tuska tribes, one of the more barbaric variants. Whereas some Trolls, like the Burning Fang tribes of the South, could at least be reasoned with when alive, if one spoke the tongue, the Tuskas were as likely to eat you as they were talking to you. And this was a specimen of extraordinary size, at least four times the height of the Mage.

Trolls never stop growing in their lifetimes, however, the larger they get, the more they consume. In the harsh winters of the North, cannibalism was not uncommon, and troll-on-troll violence was the norm.

This one looked like he ate whole TRIBES for a meal, that’s got to be the largest, UGLIEST motherfucker I have ever seen, Hulk thought, and who the fuck decided a troll needs swords for fingers!?

With the permafrost of the North, it may have been dead a year ago or hundreds, it was too disfigured by the foul corruption of miasma for Hulk to tell.

The occasional flash of light from Gerard in the distance at least let them know that their Senior Brother was still alive, but for how long…

With the Troll having emerged from whatever it was eating, making it into the Temple safely was going to be a question of speed, misdirection, and deflection. For if it turned their way and saw the three of them, John would surely die.
There was no way that any of the three would survive a swing of its tree trunk arms or lethal steel and bone-spike embedded fists.

Elissa sent a prayer to Saint Stacy for the safety of Gerard, and to bless her next arrow, for if there were ever a time she wished for the Divines to notice her, now would be it.

She just prayed that it would be one who might aid, as the last thing the team could afford was the attention of one of the Dark Gods.

A further groan vibrated through the thick stone of the temple, immediately the troll’s head snapped towards the three.