As the team summited the ridge overlooking the village, the devastation became clear to them all. 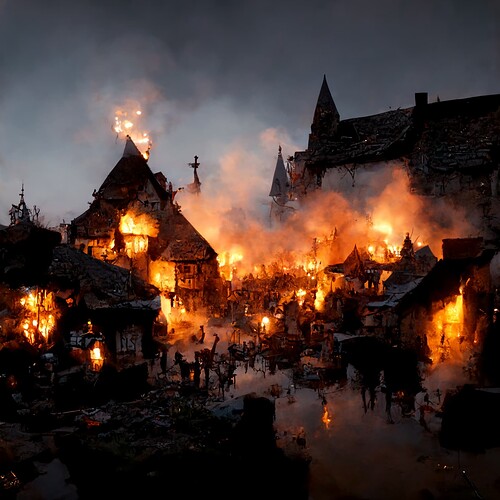 Rotting corpses and skeletal figures were swarming the Temple, its meager Divine protections providing a temporary respite, but there was only so much that any enchantment of the Order of Protection could take.

A horde of near hundreds of assorted zombies and homunculi of stitched-together body parts was clearly more than just the village’s inhabitants, it should have been home to fifty or sixty people tops this far north. Graveyard’s worth of bodies filled the village square.

“Undead…but more than that…I haven’t fought one since I was a Disciple, yet I never saw creations such as these” admitted Gerard “This speaks of foul necromancy, be alert, there may be a Lich or dark arts Mage behind this.”

“How can the four of us face that!” Elissa shouted at Gerard.

“With blade, bow, and courage,” Gerard said through gritted teeth. “We can’t take on an entire army of the undead by ourselves, but we can distract them for long enough to save the civilians”

“Hulk could provide an illusionary cover… but what if the Undead don’t respond to it, or worse see right through it” Elissa considered for a moment. “Hulk, what do you think?”

“Can’t say I’d know…maybe? If they are being controlled though, I’d guess that I’d have to fool the controller, cause those ugly fuckers don’t look like they really care much about whatever I can conjure up” Hulk responded with a quizzical look, “We just arrived, who knows how long the survivors have been up on the roof. I reckon we look for a choke point”

“Agreed, their numbers will work against them and we can whittle them down, but where,” Gerard asked the team. “And what about John?”

Gerard gestured to the young man who was standing behind him, looking pale. “He’s not ready for this.”

Gerard hesitated for a moment, then nodded. There was no room for softness in dire times and John had almost grown a beard in, if there was ever a time for him to prove his worth to the Brotherhood, now would be it.

“We will clear a path to the Temple wall and jump over from there, we only have one shot at this. We will then ask the locals for any information, perhaps there is a crypt or cavern system near here that we can utilize for defense. Hulk and I will clear the way, Elissa you keep an eye out for any Mages”

“Be careful, Gerard,” she said as the two started to run.

“May your arrows strike true, Elissa…Hulk, are you ready?” Gerard returned.

“As I’ll ever be” the mage replied, quickly putting away his bottle of rum.

The warrior and the mage started to run and glide respectively down from the treeline, into the fray.

Hulk began casting as he reached the snow banks at the village entrance, fire elements swirling up around his legs and into his hands. Gerard had drawn his sword, its soft white glow illuminating the snowy night.

At first, none of the undead had even looked their way, but as Hulk unleashed his first spell, incinerating tens of zombies, the horde turned as one with a multitude of eldritch screeches.

Hulk faltered momentarily at the sheer volume unleashed, but regained himself quick enough to erect a barrier between him and a horrific creature of sharpened bone, sinew, and grotesque features, his diminutive size helping him narrowly avoid a gob of miasmic slime that had been launched at him.

Meanwhile, Gerard had begun a whirlwind of blades, severing limbs and heads with every movement of his blade, with each death the blade’s white light grew more intense. His family heirloom, the Longsword of Light, was famed for its damage to those who had fallen to the darkness of the universe.

“We’re almost there!” Elissa shouted over the din of battle. John was right behind her, fending off any zombie that strayed too close to her. He was panting hard, but he didn’t complain. Gerard and Hulk were ahead of them, clearing a path through the undead with fire and steel.

Just as they had leaped over the Temple wall, John stumbled and went down with a cry. Elissa turned to see him clutching his leg, his face pale with pain. “John!” she cried, running to his side. “What happened?”

Elissa swore softly.
She knew they couldn’t carry him all the way to the temple roof.

And even if they could, there was no guarantee that they would be able to hold off the undead long enough for the civilians to escape with one of them unable to run.

“It’s all right, the mission comes first,” John said bravely. “Just make sure you save the others.”

“No,” Gerard said firmly. “We’re not leaving you behind you idiot, we made it this far, we will find a way.”

He turned to Elissa and Hulk. “Get John to the temple roof. I’ll hold them off.”

For the moment, the horde had to backtrack to the Temple entrance, as the wall was too high for them to scale.

Elissa hesitated, but Hulk nodded and scooped John up in his arms, with the aid of a minor gravity spell. John was a Disciple, and Hulk’s tiny frame would not be able to lift a leg without it, but this left him unable to cast without dropping John. They kept running along the Temple wall in order to divert some of the Undead away from the entrance.

Gerard didn’t reply, knowing that every second counted. If he could just breach the entrance, and barricade the door, then he would have time to plan their next moves.

After turning his head back to make sure that Elissa had left with Hulk and John, Gerard lept off the Temple wall to dance with the dead, his sword raised and near blinding with Holy fire. If only he had more time to find the true source of the miasma he felt. 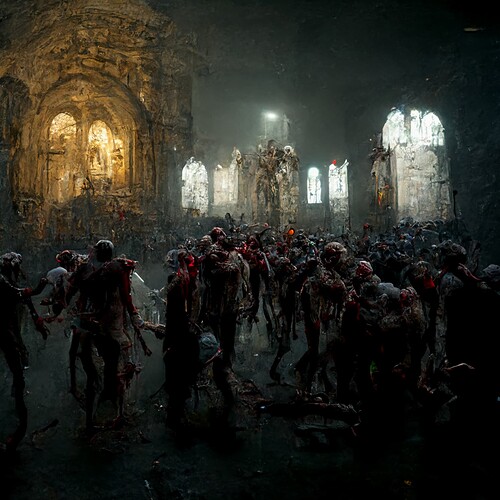