Idea for a game interface

I used to play a game called “Vampires! A Dark Alleyway.” – The game is completely text-based and there are places like shops, pubs and train stations that you can visit and interact with. The “map” is 200x200 tiles, with city streets named after animals and trees, minerals and moods.

Players can interact in various ways, like talking, robbing and fighting.

Here is a screenshot of my vampire at a potion shoppe, Potionworks: 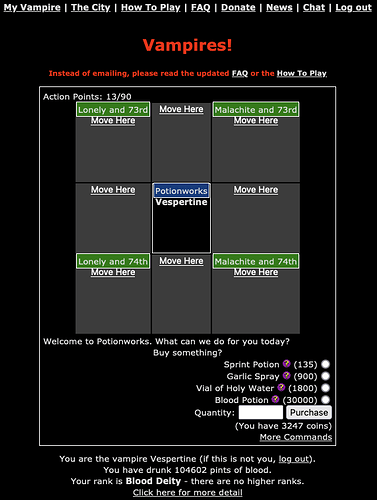 There are certain mechanics applied to shops:

Here is a screenshot of a bartender telling me where the nearest shop is, after I purchase an expensive drink: https://i.imgur.com/RFkmANX.png

Just an idea, not sure where this could go, but it seems like a fairly easy idea to grasp, implement and makes sense for a text-based NFT to have a text-base game interface.

If anyone wants to chat more about this idea, feel free to hit me up on discord: yuppie#4081

I completely agree. I think we should make a MUD or something like it. If you haven’t tried a MUD go to https://www.dartmud.com/ its great.

If you want to approach a MUD here’s a potential rollout schedule of whitelist mints that would establish the “branches” upon which the community could build:

Every hex minted by loot holder. On it there’s information that the Mud uses to generate the scene. Holders get to build here or rest here or some custom action.

+NPC Characters
Populate the world with characters. Character holders might get a custom interaction with them like Skill Training or buffs.

Enemies
Stats + a custom Boon (for holders): +1 Damage to Orks

Fill in the world with a series of foundational mints. Then CURATE which community projects get incorporated into the world. If someone WRITES IN the coolest companions derivative ever, vote to add it!

I love loot and i just wanted to put this out there.