After introducing my idea of creating Loot’s Lore on a wiki format with tokenized voting, I’ve been thinking these last weeks about why should we build this and how can this be built.

Why building this
First of all, I think this is a must-have piece for Loot’s success because of the power of abstraction it provides to builders. Let me explain:

Imagine a scenario without a defined written universe. Those who want to participate in the creation of a game or any other type of product require a certain context so, for them, it would be necessary to develop this entire universe from scratch, in addition to the technical development of the product itself, in this case, the game. So the absence of a written universe makes the creation of complex projects on top of Loot an even more complicated task.

However, with a defined written universe, builders can focus on their specific task, also building a coherent universe with the approval of the community. 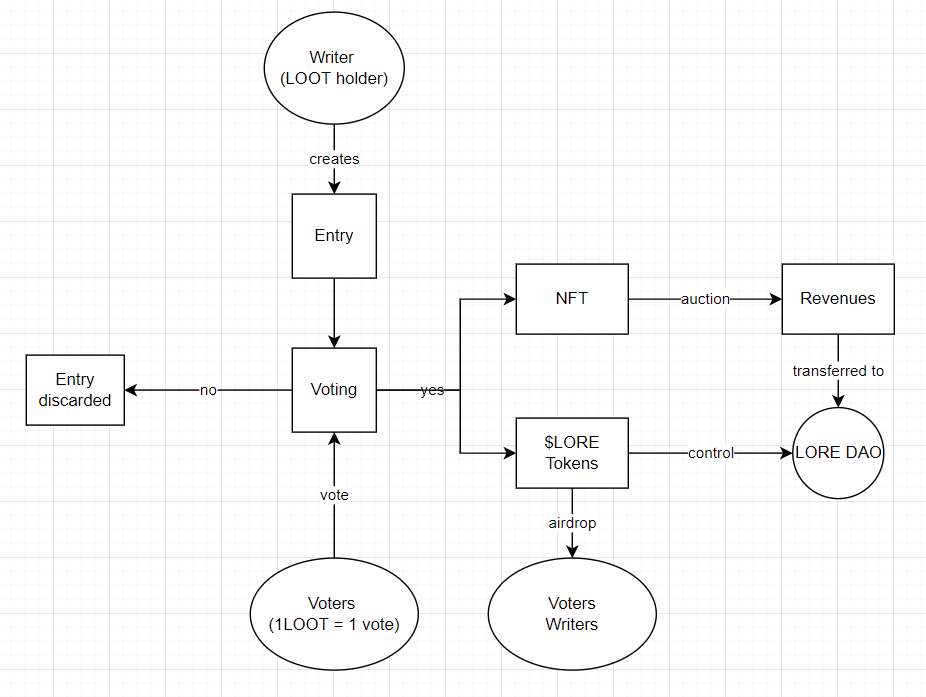 The first step is for a writer, Loot holder, to create a new entry. Once that entry is created, its inclusion in the wiki is open for voting. If the community decides that it should take part, the process continues with the following actions:

The NFT is auctioned and both the ETH received by the auction and the royalties generated by its subsequent sales will be sent to a multisig wallet controlled by the holders of $LORE.

How can we edit previous entries?
Once a vote has concluded, that entry is subject to possible changes by the community. An editor, Loot holder, can propose a change, and that change is voted among Loot’s community. If accepted, the content of the NFT is updated according to the new version of the entry.

Technology
Regarding the technical part, it is probably best to use the Snapshot API and define specific formats in the titles to differentiate between new entries and editions. It does not really make sense to build, at least at this stage, a voting system from scratch. Snapshot’s technology is there, on-chain and gasless.

Please, feel free to give some feedback, ideas, more open questions, or whatever!

Why $lore instead of $AGLD? If $AGLD succeeds, no other tokens are needed next; if AGLD fails. Tokens that are already on-line first-class exchanges such as coinbase can fail. I don’t think loot will develop any more then. Most people will no longer believe loot, including myself. So don’t think about creating new tokens, because we don’t need them.

In my opinion, all those who say that they want to issue new tokens are community splitters. And imitators. $agld has given a golden hill. A token that only exists in the primary market operation has no future. Include bgld,cgld,dgld, etc.

How can we airdrop $AGLD to participants? We do not control $AGLD issuance, $AGLD issuance is managed by AGLD DAO. This token cannot be used for this purpose. Also, this is a personal opinion, AGLD is completely useless because it can be replaced by ETH, which will be preferred by most of the users, on every single of its use cases, but that’s another topic.

Regarding your second commend, do you know another way of creating incentives for writers and voters without a token? I do not particularly think that everything should be a token, but I could not come up with any incentives model for participants without a token.

With the current liquidity of agld, do you think he is useless? Ha ha. Agld is useless, but your project, your token will be useful. Don’t you think it’s funny? Can you send money to coinbase in your life? Finally, it is true that not all items need to be tokenized, but what next? Is that why you want to issue your own tokens?

Finally, tell you that everything in the financial market can be useless and false. Only liquidity is the most real thing. That’s why I said agld is a gold mine to be mined.

I agree with everything you are saying. I hope we can use $Lore in our collaborative project. I will send you details on Discord, feel free to reach out Sable#8026

I guess I can draw comparisons here.

Voting in AGLD seems short-sighted at first glance. I will have to go over it a bit more tomorrow and get back to it.