I’ve been thinking for a while, as a result of this tweet from Spencer Noon, that the most important thing about Loot is its lore, building its universe.

Loot must carry out the process of creating a science fiction universe in a collaborative and decentralized way. It is not a trivial matter, moreover, it may be the first time that something like this has been carried out.

To know how we can carry out this task, let’s first analyze how this process currently happens:

In traditional science fiction universes, the information about it is created by one author or a group of authors. It is usually a small group of professionals and easy to coordinate. Quite the opposite of Loot, where we are a group of 2,500 people that speak different languages and have different writing skills.

Therefore, in the traditional system, it is the users who, previously observing the world and collecting information from it, propose new information and changes in it. It is information that is first observed and then documented. In Loot, this process does not happen in the same way, it is the community itself that creates that universe. The events are observed after the documentation, since it is the documentation itself, through the community, the one that decides whether these events have occurred or not.

This has the consequence that the tools and processes used to create these traditional science fiction universes are not valid to reach the same result in projects like Loot. We need to update them.

We can start from the more traditional format such as a book, the members of the community themselves could propose new paragraphs, pages, or even chapters and Loot holders could vote which ones they accept and the history of Loot could be built collaboratively.

However, a sufficiently complex universe can have too many interdependencies that can be difficult to follow and visualize with a format such as linear as a book. This is the reason why another type of format is necessary: ​​a wiki.

A wiki allows you to view the content in a clearer way, being able to analyze each piece of information in isolation but at the same time being able to access other pieces of information related to it at the click of a button. It is a way in which we can see more clearly the interdependencies between all the elements of the universe and, at the same time, create more complex universes thanks to the power of abstraction that this format gives us.

The Loot universe could be constantly updated by the community and it would be the token holders themselves who would accept or reject these new changes in that wiki with a voting system similar to Snapshot. 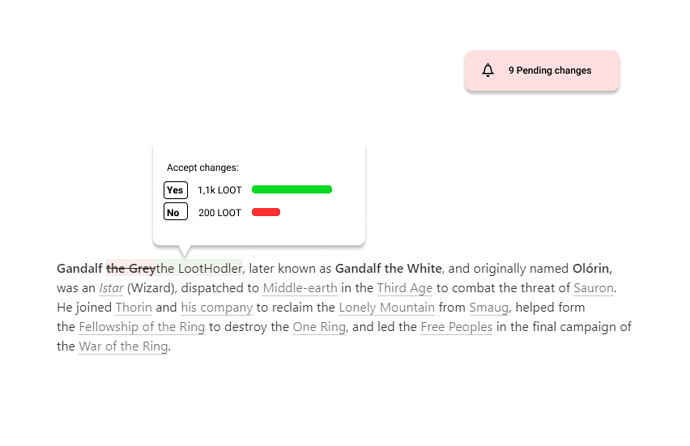 At this point, I begin to realize something… Why should we do it just for Loot? This system of creating science fiction universes in a collaborative and decentralized way can be perfectly used by other types of NFT communities for the development of their own lore. Once a project has a detailed wiki of its universe, more other players can come to work on top of it working on much more solid terrain, adding much more value to the community. Is this the fandom wiki for web3?

What do you guys think?

This is extremely cool idea …

This will really make numerous projects to one !!!

This is a brilliant idea.

There is plenty of Lore already written around Loot, and more is being discovered from the Code.

Does such a tool exist? Almost like a git/snapshot hybrid

As far as I know, nothing similar exists today. I was actually thinking of using Radicle as a quick potential solution but it does not support Windows users.

But yes, it is Github with tokenized voting for pull requests. We could actually fork Radicle and simplify/adapt it to this use case.

This definitely would make Loot a collaborative and decentralized universe. It would also be very fun to contribute this way

Quick update: I plan to work on this from next week onwards (I’m pretty busy this week), I’m thinking of a quick MVP with Github + Snapshot + maybe a friendly UI for non-Github users so people can submit the pull requests without login there. Also need to think about incentives for writers and much more details.

If anyone wants to work on this with me => DM

I love this idea and agree it’s so important! Shared this in owners chat, but SCP Foundation is a cool example of a successful fictional universe built from the ground up (though a different genre).

awesome bro! This is so fascinating

Achieve it sir we love it !

Love it! Already have things to populate the wiki with!

I want to contribute. This is fun and great

This is brilliant. We’ve built Banners to be the society of Loot at a point in time during the Exodus period after the cracks appear in the 16 orders and before the Great War. We make no inferences on story or lore, but consider Banners the scaffolding for narrative. How a house rose, what events led them to their current status, what is their current status, who are their allies & enemies. Banners is a narrative skeleton for Loot, but an art project for the NFT and crypto community at large. Our plans on the art side (commissioning artists for graphic airdrops) should bring attention to this more accessible part of Loot and hopefully involvement. The Wiki would be an amazing place to hang the Banner bones and start to flesh out stories! Let us know how we can help!

Waiting for something like this happens, a new web3 wiki…

I love the idea of combining the voting elements of Snapshot with some sort of a wiki. Token-based governance seems like it’d be an incredibly useful tool for giving community-driven lore added legitimacy. Loot is probably the best place to test it out, given that there’s an existing community and theme for the content. But I could see this catching on in other projects/communities as well.

One thought: Perhaps AGLD should be the token for voting on changes to the Loot lore? That way, more people can get involved in the lore development process, and contributors would have a more direct incentive to participate. AGLD rewards could be distributed to writers who have had a certain number of edits accepted, or who have contributed X number of words to the lore. They could also be used to reward frequent voters, to encourage active participation among community members.