The Grand Adventure is a generative story experience that takes place in the Lootverse: Blaseball for Loot, effectively. An early release of the first season, “Avenluutn,” is nearly ready, so it’s time to share a bit!

Anyone can tune in to the Grand Adventure site to read algorithmically generated stories with a consistent setting and characters: think of it like a comic book or newspaper serial, only algorithmically generated and in the world of loot. Stories are revealed gradually and build on each other as the adventurers discover loot, learn new skills, or suffer injuries. Adventurers become more capable as they collect more loot, skills, and traits.

After each story is finished, a single copy is auctioned as an NFT. In the future, players will also be able to affect the game world by voting to change rules, add characters, and so on.

Our main goals are 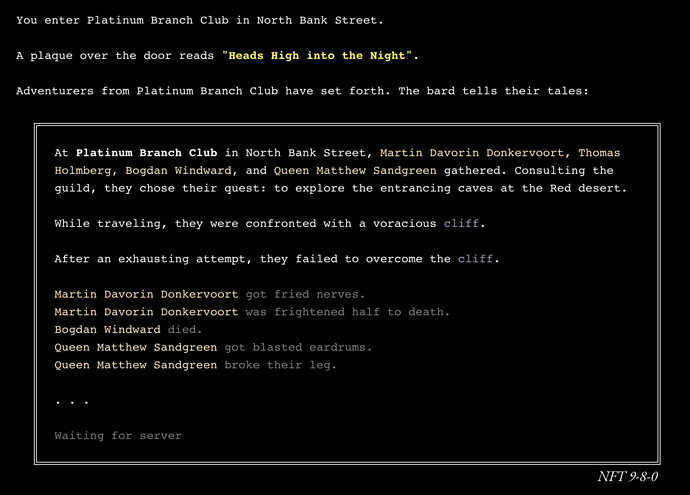 Why does it matter to the Lootverse?

The Grand Adventure uses existing Loot projects (original Loot, Names, Class, more in the future—Crypts and Caverns would work great!) as sources of content for its story generation. In other words, we’re a concrete example of an experience built on top of base Lootverse content.

It’s pretty important to us that the core experience of the Grand Adventure is accessible to everyone, and not just current NFT holders. That belief comes partly from our experience in the games industry in general, but we also think it makes sense from NFT-holders’ perspectives: by making it free to have the core experience, more people will care about and engage with the core content, and some of that value will flow back to the NFT holders.

Collecting the generated story NFTs won’t be required to participate, but we think players will value the ability to collect significant moments in the history of this world and these characters.

I think this should be left to individual interpretation, but perhaps the Grand Adventure: Avenluutn takes place during “The Great Adventure”?

What we have now

Today, we’ve got most of an MVP of the first season, “Avenluutn,” with a front end, story generating scripts and services, and smart contracts for revealing, auctioning, and minting NFTs with permanent links to their stories. We can schedule a round of stories, and anyone can follow as they’re revealed and collect the corresponding NFTs. We’re pretty satisfied with the results we’re getting so far, and we hope some folks here will be interested.

For the technical folks, we have a pretty interesting new mechanism here:

What we want to build

One thing we don’t have yet is a mechanism for community participation. In the future, we’d like anyone who engages with the game to be able to vote and affect the world, including people who buy / hold NFTs but also those who take less costly actions. We think that’s a pretty important element, but it wasn’t necessary to take the first steps. There’s also a huge amount of potential in fleshing out the story generation.

Long term, we’d like to see the Grand Adventure become a game that runs in seasons, with each season generating a number of stories. Between seasons, the community votes on and develops updates that push the emergent game world in fun, inspiring directions.

We’re a team of three with a bunch of blockchain and games experience building this for fun.

If people are interested, we’d love to onboard more contributors (mostly devs at this stage), and we’d love to build towards a presentation on an upcoming community call. After that, we’d like to do an open “early release” season during which people can follow the beginning of our world’s development, collect early NFTs, and help us improve things before a wider release.

I’m super excited about what we built here! I’m almost always available (in the US Central timezone) to answer questions or chat or whatever.

Please don’t hesitate to bug me with stuff about this.

Oh and the sneak peek is on Goerli if you want to play with the auctions or claiming stories.