Request: Discussion on Loot and its current value

It’s great to see the ecosystem grow so much and achieve new heights. The most beautiful aspect is that people are getting together as a decentralized community for a common goal. When I first heard Dom mention Loot and the hyperverse, the way I saw them when I first read the idea, was that they would each be like an all-access master key: allowing collectors to gain access to limitless possibilities. It felt like my childhood fantasies could start to take form.

As mentioned, in a previous topic by @hype_carry , “Far from a crypto/blockchain brain, I have a hard time understanding how anyone interested in Loot can create value upon it without having an original bag,” it seems to be a question many people have pondered on. But the fact remains that the value of Loot continues to fall while the ecosystem grows. I’m just here for a discussion on how we can provide nutrients for the ecosystem and also increase the value of Loot. 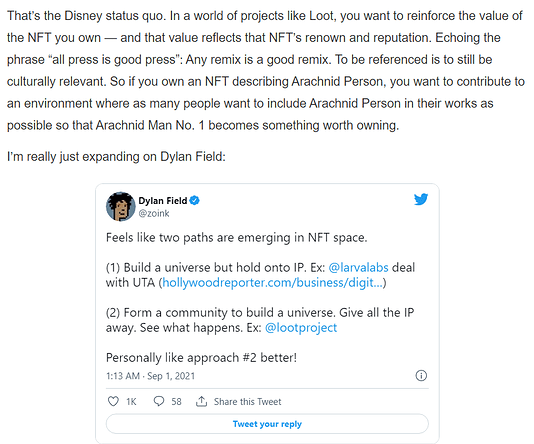 “In a world of projects like Loot, you want to reinforce the value of the NFT you own - and that value reflects that NFT’s renown and reputation.” This quote is from an article written by Kyle Russel, a writer at TechCrunch, it’s very clear what the message is here. So, we have to think, which NFT are the current projects really reinforcing? Upon minting an NFT, it feels like the current projects are going on their own separate route. The value from Loot gets transferred to the minted NFT: reinforcing their NFT.

It seems as though Loot itself will eventually be buried and become an idea that inspired other projects to create their own separate metaverse.

As commented by @whynotdoit on @hype_carry topic, “developers are not volunteers. If they build the metaverse on Loot, they can not sell NFT. Therefore, they will create their world on their NFTs, not on Loot.”

Let’s say that it is still the Loot Universe. But then why are people not putting any value on Loot? People do not need to pay the expensive price to own a Loot when they can join a game without Loot. Also, why is the value of Loot dropping?

Let’s take a look at one of the most successful projects, Genesis Mana. Their idea behind the project is innovative and amazing and the project itself has brought so much awareness for Loot itself. We have a lot to thank all the projects for this. It’s not easy work, the hours and days even weeks developers have spent to make an idea into a reality is work that cannot be justified by mere numbers. I believe Genesis Mana will become an even greater project than Loot.

Please take a look at the trading volume (last 7 days) of Loot and Genesis Mana (on OpenSea) below.

At the rate many projects are progressing, shouldn’t we stop and question whether these projects are part of the Loot Universe or not? It’s obvious from the comparison that Loot’s value and reputation are being depreciated at an alarmingly fast rate.

“So if you own an NFT describing Arachnid Person, you want to contribute to an environment whereas many people want to include Arachnid Person in their works as possible so that Arachnid Man No. 1 becomes something worth owning.” (TechCrunch)

I couldn’t agree more with this quote. So, if we replace Arachnid Person with Loot, it will sound like so, “so if you own an NFT describing Loot, you want to contribute to an environment whereas many people want to include Loot in their works as possible so that Loot No. 1 becomes something worth owning.”

How will this sound if I were an investor in Genesis Mana? “So if you own an NFT describing Genesis Mana, you want to contribute to an environment whereas many people want to include Genesis Mana in their works as possible so that Genesis Mana No. 1 becomes something worth owning.”

From this topic discussion, I hope to open a different possibility. A possibility of reinforcing the value of Loot and creating a community to work together to make the hyperverse a reality. 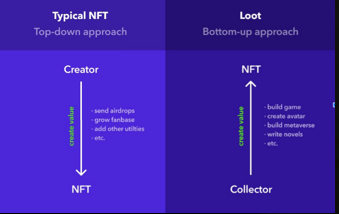 I’d like to ask us to remember what this picture represents. I didn’t understand it at first glance but as I researched more into what Loot theorized, it became clearer and very appealing to me. I’ve broken it down so it would be easier to interpret below.

What I admired so much about Loot was the bottom-up approach. The current approach is just a system that would be decentralized but isn’t and is a repackaged version for a new centralized system.

I believe this is a huge wall that will be almost inevitable to overcome. Just like the ending of the “Look Who’s Purging Now” episode in Rick and Morty, people should be paid for their work. However, with great minds thinking together, I’m sure we can pave a new path to fortify value on Loot and create a path for a new route to venture on.

The main question I ask us to discuss is: how can we overcome this seemingly inevitable outcome?

Let loot holders stake their loot to earn a token. Use the token’s treasury to fund projects that want to use our token. The price of loot will increase as the price of the token increases. The token can be AGLD, but if the AGLD community doesn’t want inflation we can create a new token and make it the official loot currency. It’s much easier to get projects to use a token than it is to use our loot bags.

Thank you for sharing the information in my concern @lemonade_iced, and it is well elaborated than my explanation. And The phrase “Loot Proejct will be buried and become an idea that inspired other projects to create their own separate metaverse.” really expresses the current situation.

The bottom-up approach is a game-changer that can impact the world with a new definition of content’s value. And I was fascinated by that concept of Loot. However, achieving that ideal goal is not easy as people think, like Bitcoin. That’s why we need to keep talking and discussing to find a way to accomplish that instead of disappearing.

For the solution, I deeply think each Loot holder should reinforce the value to Loot, not just wait for developers to create the contents for the NFT; As @hype_carry said, skin in the game. Although developers will help to expand the Loot ecosystem, it does not mean they will increase the value of Loot.

Thank you for understanding

Wow. This idea is really good

Binding Loot coin permanently with Loot Bag could significantly increase the value of Loot, not separated like AGLD. And staking is a great way to do that lol. Any further idea for that?

But the point is still the same. Why the developers who are not own Loot should do that? instead of creating their own coin. They can create their own coin as currency in their ecosystem to reward their effort; why do they need to incentify Loot holders?. "Ecosystem can grow fast, but it doesn’t mean Loot’s value will grow "

It’s a great suggestion but the problem is that developers can just go make their own and get rewarded for their work. Why would they need to donate their time and profession?

Have you invested in Loot? The points you’ve made are valid but they would only carry value if you have your own skin in the game (as you’ve mentioned).

I agree. Seems to have a lot to say.

Of course, I have invested in Loot. I invested as soon as I saw the project. Ecosystem going up it is great. I lost a lot of my investment but I still see hope for Loot. I believe in empathy and community. I plan to continue to invest in Loot. I am all for Loot and believe Loot will be awesome project in the future. *fingers crossed!!

Okay, you’ve made your point. That explains why you have so much valuable insight. Would you happen to have any ideas for a path to reinforce Loot?

At first I was thinking about a future with loot verse and what projects are possible. But projects did not go in the loot verse direction so I was a bit disappointed.
The best conclusion I thinking of was projects for Loot holders to each raise Loot value.
I do not have any kind of expert skills but I am working on a small project to raise Loot value.
The difference between current projects and this is I am trying to make something that can forever be linked with Loot as core value.
I do not have skills like the other developers and I am not outstanding in this technical field like the other developers but I have high respect and lots of love for Loot project and want to make sure to be a part of shaping Loot verse.
I want to show the Loot community that even someone like me can contribute. I hope to spark a light for the future of Loot verse

Could you explain your project in detail?

It is a project to solidify Loot value. As a Loot investor myself it was very difficult for me to showcase my Loot and thought that there should be a project that is for Loot value. The project is called Loot Punk and there is no limit to minting amount. Precisely, minting does not become disconnected just because it was minted. I think that Loot holders should be allowed to mint as many and whenever they wish. To explain, selling Loot after minting Loot Punk does not mean the new holder cannot mint anymore; therefore, Loot Punk will always be subordinated by Loot.
Think of it like this. If I were to purchase 1 of the 36 Ferrari 250 GTO to ever exist at an auction. But the original owner made 2 keys for it. But I the original owner would only have a key that represented the symbol of a Ferrari 250 GTO. I would be the true owner.
Loot Punk is a project for Loot holders to be able to have something that can represent their investment. Just as people show off their expensive investments, I felt that Loot also needed one.
It is not ready yet but if you are interested… https://lootpunk.org/ you can take a look.

Yes, that is true… there isn’t really any way for Loot holders to show off their expensive investment for a huge potential project. I think this is very relevant because of what Twitter plans to do. Could you tell me your discord?

sure, we can discuss more in detail. I appreciated your categorized rarity post. I will send you a direct message

Me too, I wanna join.

It’s a great suggestion but the problem is that developers can just go make their own and get rewarded for their work. Why would they need to donate their time and profession?

I think that building on Loot is a way to tap into a HUGE community very quickly. It’s also being part of a very special community. What dom has done is an amazing work, very much aligned with the ethereans vision with fully on chain and composable NFTs. This in itself has value for me.

Also, now that Loot has a treasury, we can build some incentives for builders. Loot will probably gain value being at the center of the Lootverse and by controlling the AGLD supply. And Loot will forever be the origin of all future Loot-likes projects launching.

Interesting. The bottom up approach is what made me so interested in Loot. Looking to find about it more and see what projects are focused on bottom up before I purchase a few Loot