Here is my proposal:

To align community incentives and incorporate mLoot, AGLD should be inflated by 30%. This supply should be provided with early warning to all mLoot holders with a claim function on the AGLD contract.

In order for the Lootverse to thrive, incentives must be aligned ASAP. From an economic perspective, if mLoot is not incorporated into AGLD, a) we exacerbate wealth accumulation concerns and b) incentivize mLoot to develop its own token. Given the size of the mLoot community, builders will build for the larger community. So long as mLoot’s token is not infinite, it will eventually crowd out AGLD from utility and its value will plummet. Thus, everyone is incentivized to come to the table and figure this out now before we have infinite forks.

To cause the system to be hard to game, transactions should be limited to individual wallets at a fixed rate per wallet with at least one mLoot. Once the 30% supply has been depleted, no more AGLD will be issued without a DAO governance formulating a monetary policy for the ecosystem.

Hell no. Terrible proposal, you should feel bad.

Let’s see yours! Conversation has to start somewhere.

no way, are you drunk or should i tell you to gtfo?

I say give 50% to mLoot holders. It might be counter intuitive but I think the more generous AGLD holders are, the more this will be a thriving ecosystem. Whatever value is lost will be gotten back 10 fold by creating a place where people feel that everything is fair and just. What they dont want is to see the rich get richer and they feel like they are being unfairly treated

Not in favor of inflating the supply of AGLD, unless its through some kind of staking mechanism. What about issuing a separate token (adventure silver), airdropped to mloot, loot, xloot and AGLD holders?

I’m open to anything that aligns incentives. Staking could be great. You should detail this more!

I think staking is definitely the direction we should be heading, just not exactly sure about the parameters.

What about incentivizing mLOOT holders farm AGLD in one way or another rather than inflating AGLD to mLOOT owners? Plus, many OG Loot owners also own mLOOT. In anycase, it will be inflated, i know.

mloot suppose to be a fairdrop, but I really don’t think mloot is, cuz it’s totally smashed by bots.

I like this. My one qualm is that it isn’t decisive enough to thwart a fork.

AGDL to succeed it has to be a currency with incentives for people to use it. There is a reason Governments need to keep printing money to keep fueling the engines of a large society.

There will be games on top of loot with their own currencies this is an open world.

If AGDL wants any inclusive future it needs not only to incentivize a larger group but also keep incentivizing its usage.

Ponzis are not inclusive. There are already enough of those everywhere.

Can delete if this is bad form but adding a space for mLoot with the primacy of $agld intact here:

please start here: https://twitter.com/Tater3000/status/1434037849108615177?s=20 The idea Started this in Discord. Gained traction in theory, posted the tweet above and now see the need to add an additional layer since there is an immediate need to unify OG loot and derivatives. To do this we must include a season 2 layer. Considering what was identified in the tweet as foundation (deflationary currency) Season 2 $Agld would be airdropped to any Verified Loot Derivative ( or possibly just mloot…

Thanks for linking this!

This is why I propose dropping it per wallet and not per mLoot. It would attempt to thwart bots success at minting mLoot

I don’t see how issuing more AGLD to mloot holders is going to align our incentives. Look at what we saw with OG loot holders; a bunch of them sold all their AGLD and are now at odds with those who didn’t over what to do with AGLD. If you issue more it’s not going to stay with the mloot holders any more than it did with the loot holders.

There’s good reason for wanting a token that’s held by the loot holders to have a high value: it can then be used to pay developers to help us build. Diluting the value by sending it to people on the outside will destroy the utility that it holds for us. And the set of mloot holders is simply too large to hope that we will be able to come collective agreements with all of them about what to build and how to spend our money. So therefore my counter-proposal is not endorse a new issuance to mloot.

This risks a successful fork that threatens the value of AGLD as a whole. There is no collective agreement on what to build as all building is permissionless, but this allows for mLoot holders to have a real stake in the economy.

I support this because will build a larger community.

I’d be interested to hear from a supporter of the proposal: what happens to AGLD’s utility if mLoot is a failed experiment?

There are serious concerns about its minting being pre-determined, that might prevent people from building on it. I just minted the below, because I knew what I was getting… 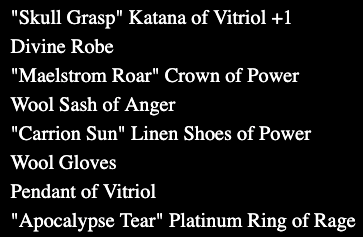 If mLoot gets replaced with a fairer expansion, how do you think about all the tokens given to mLoot holders?

but mloot is printing more everyday, how to solve ser?