This thread is to consolidate AGLD and tokenomics conversations appearing outside the Tokens category where they belong. Please review the existing threads before starting a new thread about AGLD to avoid fragmenting discussion and crowding out other topics.

2 Likes
An AGLD proposal that works for everyone
An alternative view of AGLD that solves everything
Mrtyndall September 6, 2021, 3:09pm #2

Here is my addendum to the most recent snapshot vote:

This proposal resets the current situation with governance by giving current loot holders the chance to retain voting power going forward through holding $agld and minimizes the shock on current traders holding $agld.

This is an effective reset that would make $agld the governance token at mint while loot holders don’t lose voting powers unless they choose to sell. This effectively expands the theoretical voting block to a much wider audience and let’s Loot scale.

*Text from current snapshot I was referring to: *

This proposal aims to take the first step in solving our community governance model, so that the wider goals of value creation and development support across the ecosystem can begin to be implemented. If passed, we can then vote on future proposals regarding DAO funding, inflation (if any), etc.

no, agld already has strong network effects and you would burn all the holders of it. It was already fairly distributed and it doesnt need to be THE governance token, it can be part of governance with loot holders

Airdropping 10k of a worthless new currency does not help the Lootverse or development. It just gives people a worthless airdrop.

There is an advantage to being connected to a coin which is already listed on major exchanges with $350M of capitalization. This needs to be considered and harnessed rather than summarily rejected just because “wen airdrop”.

This ignores AGLD’s original purpose of acting as a game currency. Creating a v2 that doesn’t solve for the existence of mLoot is not solving anything.

It only has value because of the implied connection with Loot. Without governance and official buy in it will become worthless. Better to transfer as much value as possible while giving everyone an incentive to ratify.

I don’t disagree but it seems like their might be a scaling issue with Loot being a governance device.

Without a fleshed out game I think we need to focus on a token to help govern and something that can store value to incentivize development. Right now $agld is too fractured and has little hope in being the governance token to loot and it doesn’t look like they want to cede control to loot owners. It appears it might just be an island off to itself without any connect and could quickly implode without some kind of “official” connection.

Loot holders already had their airdrop, they didn’t have to sell.

This is called a rug pull.

Central exchanges have already told users that $AGLD is the Loot dao Governance token along with other use cases. It seems wrong that these central exchanges have been told this information and then people can vote on it days later. If $AGLD doesnt become the governance token then the project looks misleading to members of the public who have invested into it on these exchanges. Without trust this project will crumble. Its better to be truthful and announce that $AGLD is the governance token to clear up any doubt about the project. It seems incredibly unfair for people to be misled about what they are investing in.

LOL imagine thinking this is a valid reason. Fuck CEXs

This part of the loot project is the most chaotic thing. There’s too many people who don’t understand how growth and development works giving their input and advise. You don’t play around once there’s money involved.

The majority of people here are in for money. It grows on NFTs. Mint, sell, buy, resell. More AGLD drops, free money for me. You know that’s what people are doing. The second there’s a bear market, 95% of people in crypto will be gone. Then you’ll have Halo, Fortnite, Call of Duty, Nintendo, Steam or some other main stream metaverse that gets built. They have the money, the brand, and love micro transactions.

For people who need help seeing the importance of AGLD as a token. Take a look at Avalanche and Solana. 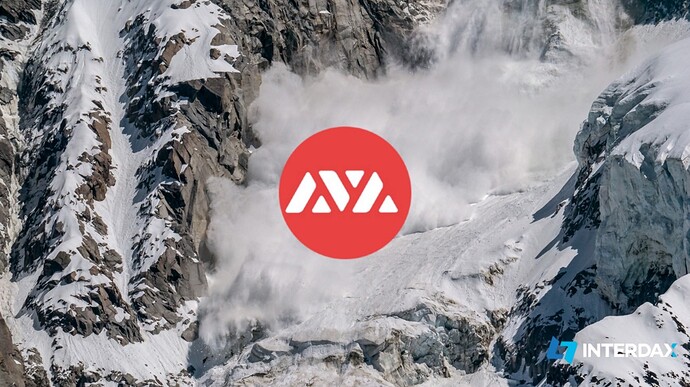 What is Avalanche (AVAX)?

In this second part of our series on Proof of Stake blockchains, we examine the Avalanche platform and the tokenomics of AVAX. 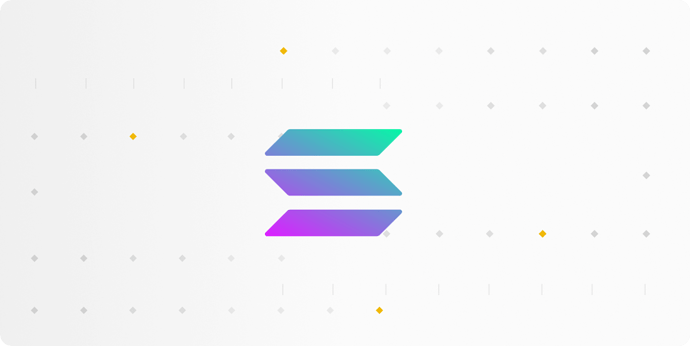 Now look at loot. Imagine loot without a token, without exchange exposure, without direction, without potential funding. $322,904,462 market cap. Imagine a proposal for minting 100,000 AGLD for funding development, marketing, community activity and so on. Magic. And it benefits everyone. Right now you have a lot of potential players with AGLD invested in this potential metaverse. Skin in the game. There will be far more people with tokens than NFTs. Why stray away from what’s proven successful for others?

If you don’t have a proper direction and organization, the project is doomed to fall behind to those with vision.

andrecronje’s rarity.
The clones on BSC, Polygon, etc. Why do you think many of these other projects are so successful? They will fund developers, marketing, everything. People don’t care about decentralization, or who was first, they care about money.

Who cares how it’s advertised, really. Saying that our fate is already set in stone because of what a CEX says is laughable

AGLD can still do all of those things by governing itself. It is not going to govern Loot or Loot’s treasury in any way.

Id like to propose a merger of governance between loot and AGLD.

AGLD is a big part of the lootiverse now and needs to be included, its market cap, access-ability and inflate-ability can help develop the lootiverse to benefit both parties.

This would give small holders an entry point to the loot dao, it would allow rapid increase of treasury funds as required through inflation of agld. Some current market participants dont like the way it was dropped, but ignoring or separating it now would cause too much harm to many ecosystem participants and hurt loot in the future

I think AGLD is not suitable for governance tokens, because the person who holds agld does not necessarily hold Loot or mLoot.Some people sell Loot after receiving AGLD.
We have a better way to set governance tokens:
We can use Loot to farming, and the farming coins are used as governance tokens.

We need a currency made around incentivizing usage, maybe drop AGLD to wallets based on usage of the metaverse, or proven transactions with derivatives.

This will incentivize development of ID’s (Proof of Humanity) in the blockchain and reward people for their time spent in the ecosystem.

If AGLD does not improve the ecosystem we can create a new ERC-20 token focused on incentivizing the growth of the ecosystem not a particular group.

Here is my idea on this topic.

This is an idea in order to create more inclusive and fair system for DAO governance in a standardized way. Background: Considering there are limited number of LOOT NFTs, governance will be limited to OGs or ones that have significant capital (e.g. a lot of ETH). In order to make LOOT DAO/Treasury voting more inclusive, I propose the following mechanism. SUMMARY LOOT DAO governed on majority/unanimous vote of qualifying Guilds. For a Guild to qualify for LOOT DAO vote, a pool of minimum AGL…

Fleshing out a proposal that I hope unifies all the parts of the Lootiverse.

TLDR: ‘Lootiverse’ as an ecosystem of games in which all players can earn $ASLV and $AGLD. 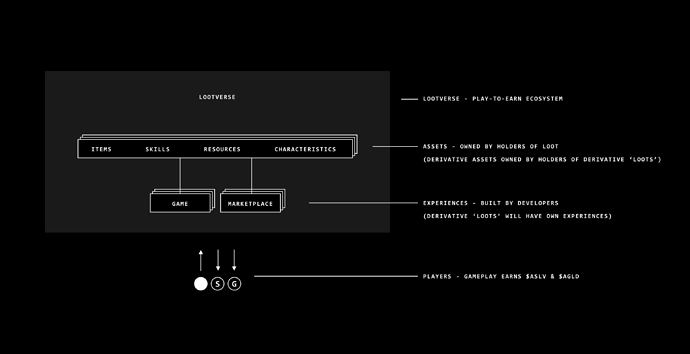 Pls give thoughts on improvements, bits you like/don’t like. 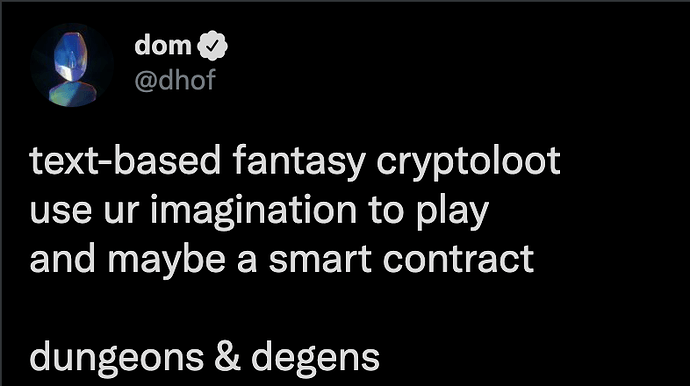 We will have 1 ‘proof’ OG game called “Dungeons and Degens” .

Only OGLoot and MLoot holders can play to earn the highest amount of $AGLD .

OGLoot holders are given land for yield farming and/or the ability to decouple loot items and sell them as synth loot . MLoot holders can play to earn $AGLD or sell their MLoot to other people wanting to play the game.

For now, people that have OG/M Dungeon and Degen Loot in their wallets hold the keys to the most exclusive game in the Lootiverse

Lootiverse Marketplace
OGLoot holders can create synth loot and sell them on the Dungeons and Degens marketplace. Derivative games have their own marketplace where their players can buy and sell to the specifics of that game.

Currency
Currency across all game marketplaces should be $ASLV $AGLD for Lootiverse governance (which derivative project gets funded, marketing, paying contributors) and maybe (per @skunk, special character actions).

Other ideas that might be of interest @MrBigTimeCEO - Discord

Derivatives
Derivatives could follow the same OG/ML nature of ‘Dungeons and Degens’ (treating the idiomatic nature of loots as a schema/model from which they develop their own own loot-game system), accompanied with a marketplace that offers synth. Or something in the form of it. Games can come in different styles and game modes whilst maintaining the “play to earn” essence of the Lootiverse .

Derivative games are proposed to the DAO and funded in two parts :
1 - $AGLD capital for game dev
2 - $AGLD allocation for players to earn in said game.

The ‘better’ the game, the more funding and amt available to earn from playing. Devs could also build on derivative games by proposing expandable content. There could also be the possibility of an ‘arcade’ where all Lootiverse players try out and review derivative games.
Compensation could be the games’ OGLoot/$ASLV/$AGLD - to the choosing of the derivative game’s devs.